In early 2017, New Haven’s “Q” House on Dixwell Avenue was imploded to make way for a brand-new community center. In that long-abandoned Modernist building were at least two murals painted almost forty years ago. These were among the last survivors from a small but productive community mural program run for a handful of years out of New Haven City Hall in the late 1970s, thanks to the federal government. 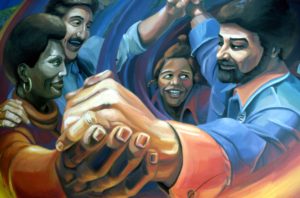 Called the Comprehensive Employment and Training Act (or CETA for short), federal funds were channeled to local governments who decided how best to design programs intended to train people for jobs. That New Haven used some of their funding to create jobs for emerging local artists and help neighborhoods at the same time says much about the leadership of Mayor Frank Logue (1924-2010). The CETA community mural program was the first time that people of color were both involved with making—and the subject of—public art in New Haven.

The display “Celebrating CETA: A Look Back at New Haven’s Community Mural Program” will feature colorful photographic imagery of the murals, the artists and participants, and scenes of New Haven in the late 1970s, when the CETA program was in play. The small exhibit will trace the beginnings of the program sourced by the Federal Government, and how the program took shape in New Haven thanks to a mayor who valued the arts, culture, and historic preservation, and to the socially-minded artists of the Elm City, many of whom became mural project leaders working with different communities across the city.