In 1943, Nazi Germany controlled most of Western Europe and the Allies were preparing for the invasion of Italy and France. Urged by American scholars to spearhead an international effort to save and preserve Europe’s cultural treasures, President Franklin D. Roosevelt established a civilian commission to promote the formation of a Monuments, Fine Arts and Archives (MFAA) section of the military. For the first time in history, soldiers whose job it was to protect cultural heritage during wartime were dispatched to Europe.  Known as the Monuments Men, these art world professionals included artists, architects, historians, museum directors, curators, and others.  Among them was Deane Keller, a painter and professor of art at Yale University. 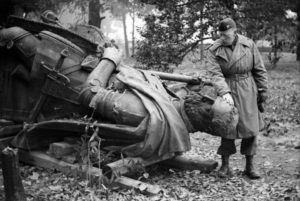 Keller’s prior experience as an art student in Rome led him to be posted to Italy, where he estimated driving 60,000 miles while leading preservation and restoration efforts that saved thousands of important works of European art.  Largely unknown until the 2014 release of the George Clooney movie, “The Monuments Men” (Sony, 2014), the real-life story of Keller and his cohorts is relevant and timely. According to guest curator Laura A. Macaluso, “Today our shared global cultural heritage is being destroyed at an alarming rate in the Middle East, in the very places where civilization first developed 5,000 years ago. History is being rewritten, and not for the better.”

The exhibition features paintings and drawings by Keller, as well as photographic reproductions of material he collected while serving as a Monuments Man in Italy. Among these images are his military identity card, Army uniform patch, dog tags, Fascist propaganda posters, soldier guidebooks, and photos documenting both the destruction and preservation of many treasured art masterpieces. After the war, Keller returned to his family and teaching career in New Haven, and became a successful portrait painter. Today, his public works can be seen throughout New Haven—in City Hall, in the headquarters of the Knights of Columbus and the Fusco Corporation, in Sterling Memorial Library and elsewhere around Yale University.