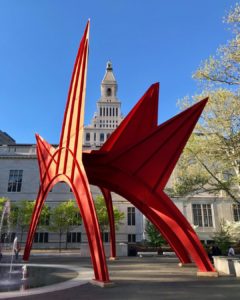 Concurrent with its status as the capital city of the state, Hartford plays an outsize role in the development of public art in Connecticut. As a whole, the city has the largest and richest collection of Colonial, Victorian, Gilded Age, Progressive Era, Modern and Contemporary public art in Connecticut. From cemeteries to parks, public schools to libraries, and public buildings to streetscapes, Hartford is a city privileged to have artwork which tells the story of the city, covering more than three hundred years of a relationship between people and place.

In addition, due to its long history of cultural philanthropy—including another first, as home to the country’s earliest art museum (Wadsworth Atheneum, 1842)—Hartford was a draw for artists and other creatives, bringing the newest ideas, content and forms of public art to Connecticut and the region, true for both the nineteenth and twentieth centuries. This book will select the most illuminating and interesting public art in the city, discussing origin, form, and the uses of public art, tying these important considerations to the reception of artwork made for the public both yesterday and today.  The book will not only shed light on the city’s past, but show readers that the city’s public art collection—viewed together, over time—is one worthy of continuing interest and investment today.

In the twenty-first century, when funding for public art remains a challenge, Public Art in Hartford will demonstrate the cultural, societal and material value embedded in these works of art, and argue for the continued preservation, education, and creation of public art for the next century.