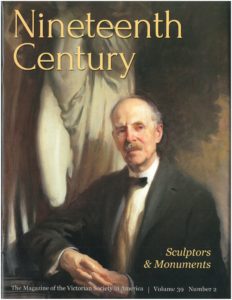 For those with an interest in public culture, the twenty-first century has produced a heightened awareness to the often marginalized medium of monuments. When in graduate school—not that long ago—my professors of art and architectural history rarely mentioned the social implications of American monuments for people of color and other under-represented communities. Monuments were evaluated on the basis applied to all forms of art, built around long-standing hierarchical values shaped by powerful systems, from the art critic to the gallery to the museum to the halls of academia. Major public monuments sometimes made it into the main storyline of art history survey books (which are used to teach with), but, measured against works of art such as paintings, their appearance—and thus their perceived significance—was spread thin.

Today, of course, that has completely changed. It is rare these days to open social media and not find a new article about a public monument in the news. For example, in the past twenty-four hours on my feed, there have been two articles about public monuments in Charlottesville, Virginia. Especially since the race-driven murders at Emanuel AME Church in Charleston in 2015 and the Unite the Right Rally around the Thomas Jefferson monument by Moses Ezekiel on the campus of the University of Virginia in 2017, public monuments and their meanings remain a contentious subject across the country. Something that would have been seen as a preservationist’s nightmare only ten or twenty years ago, such as the removal of a nineteenth- century monument from its pedestal, is perhaps no longer seen as such. Society is changing, and it is those changes that reflect who we think we are, and who we want to be, in the second decade of the twenty-first century and beyond.

Wherever you fall on the monument question—whether to keep problematic monuments or remove them or re-interpret them or spray paint them—I would guess that readers of Nineteenth Century might all agree on one core value: the more we know about nineteenth-century monument culture, the more nuanced our views become, helping to make tough decisions more balanced. In this issue of Nineteenth Century we have a variety of voices writing about public monuments across the United States, from Chicago to Texas to the post-Civil War North and the South. We also follow American sculptors across the Atlantic to Rome and Paris. There are fresh perspectives on familiar names, such as Gutzon Borglum, Emma Stebbins, and Daniel Chester French, and there is also attention given to lesser known sculptors such as Elisabet Ney and Paul Wayland Bartlett. Public monuments will undoubtedly be featured more prominently in art history textbooks in the years to come and it is this kind of work that provides the well from which future scholars can draw.

Buy from Victorian Society in America