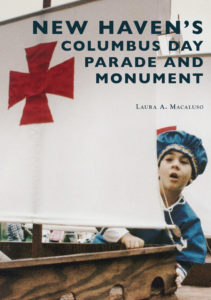 In the 21st century, the figure of Christopher Columbus is being challenged across the country, with many American cities changing his holiday to Indigenous Peoples’ Day. But, the Columbus story in New Haven is important to consider: the Columbus Monument and Columbus Day Parade exist because Italian Americans of the city needed ways to establish their presence in the Elm City. As new immigrants at the turn of the 20th century, the Italian community was disparaged and marginalized. By installing the Columbus Monument in Wooster Square, the Italian community linked itself to the American story–and proclaimed its place in a historic New England city known as a bastion of Yankee Protestantism. By participating in the Columbus Day Parade, this history is remembered and shared every October.