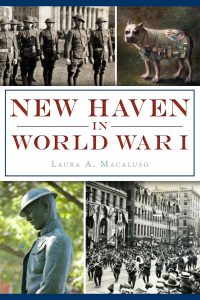 During World War I, New Haven was a hive of wartime activity. The city hummed with munition production from the Winchester Repeating Arms Company, while food conservation campaigns, canning kitchens and book drives contributed to the war effort. Meanwhile, Walter Camp, father of American football, whipped recruits and city residents into shape with his fitness programs. The Knights of Columbus were also busy preparing their “Everyone Welcome! Everything Free!” huts. And one hero—a brown-and-white dog, Sergeant Stubby—first made his appearance at Camp Yale, home of the 102nd Regiment of the Yankee Division. Using library and museum collections, the author demonstrates how the Elm City contributed its time and money, men and women and one special dog to the first global war of the twentieth century.

Buy from The History Press
Buy from Amazon