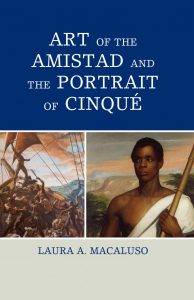 The Amistad incident, one of the few successful ship revolts in the history of enslavement, has been discussed by historians for decades, even becoming the subject of a Steven Spielberg film in 1997, which brought the story to wide audiences. But, while historians have examined the Amistad case for its role in the long history of the Atlantic, the United States and slavery, there is an oil on canvas painting of one man, Cinqué, at the center of this story, an image so crucial to the continual retelling and memorialization of the Amistad story, it is difficult to think about the Amistad and not think of this image.