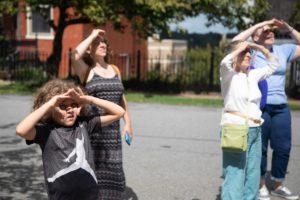 A nationwide bell ringing ceremony echoed throughout the country on Sunday afternoon to commemorate the 400th anniversary of the arrival of the first enslaved Africans in English-occupied North America.

The National Park System invited community partners to come together in solidarity for a day of healing and reconciliation symbolized by ringing bells simultaneously for four minutes.

“It’s important to remember that we are not here all on our own but connected to everyone in the commonwealth and beyond,” said Public History Specialist Laura Macaluso in explaining the importance of the Lynchburg Museum’s participation.

Macaluso says the bell ringing makes a symbolic yet simple reminder of our shared history and identity.

Volunteer Ed Tinsley assisted museum guide Melissa Vandiver in ringing the bell at the Lynchburg Museum. The sound of the brass bell could be heard throughout the city, a powerful reminder of the centuries of struggle, tragedy, and racism for African Americans in the United States.